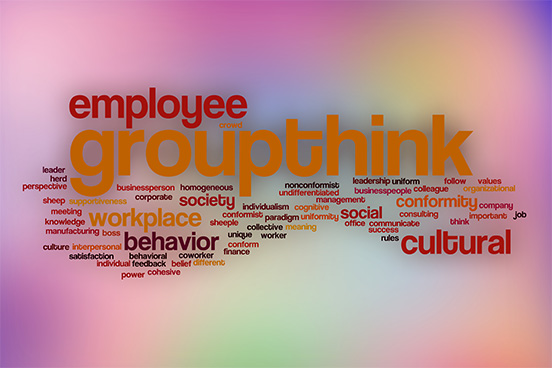 Groupthink is defined as, “the practice of thinking or making decisions as a group in a way that discourages creativity or individual responsibility.” Groupthink stems from the natural desire for harmony and conformity within a group. Instead of opening the door to conflict, groupthink shuts the door on solutions and stunts constructive conversation. Although the concept seems to promote cohesion, it severely limits creativity and hinders the possibility of all possible options being explored when examining a problem.

Organizational analyst William H. Whyte, Jr. popularized the term “groupthink” after it was originated in George Orwell’s novel “1984.” When describing it, Whyte called it “an open, articulate philosophy which holds that group values are not only expedient but right and good as well.” Giving such weight to the beliefs of the many invariably suppresses individuals’ desire to speak out against popular opinion. Later, Irving Janis, a research psychologist at Yale, began to study groupthink as a phenomenon, noting it as the source of a number of failed American foreign policies, including the lack of anticipation of the attack on Pearl Harbor. In cases such as the lead-up to the notorious 1941 attack as well as the Bay of Pigs invasion 20 years later, highly educated, experienced individuals succumbed to the need to maintain harmony rather than raise concerns that might have changed the course of history.

Why We Should Avoid Groupthink

Often the best part about working on a team is the breadth of perspectives held by the group. Everyone brings their own viewpoints borne of distinct backgrounds and experiences. Groupthink helps teams to avoid possible controversy or confrontation, which sounds like a benefit…initially. But because of the disproportionate emphasis on cohesiveness, untraditional or potentially risky suggestions may be stifled, or worse yet, never even proposed. Avoiding this mindset and allowing for ideas that may cause temporary discomfort may lead to a better overall outcome in the end.

It’s essential that teams in organizations and businesses avoid groupthink as they are often responsible for projects and plans that have wide-reaching impact. There are certain tactics teams can do to avoid the trap of blind agreement:

How Escape Rooms Can Help

An escape room is no place for groupthink. Instead, teams who leverage their participants’ unique skillsets and thought processes are more likely to experience collective success. Perhaps one teammate is a math whiz while another excels at more physical pursuits. Each contributor should be given the space and freedom to express their given talent for the benefit of the group. Often escape games call for a mix of abilities in order to successfully navigate the puzzles and challenges needed to escape the room. Assemble your team to try your hand at besting groupthink and enjoying a team win.